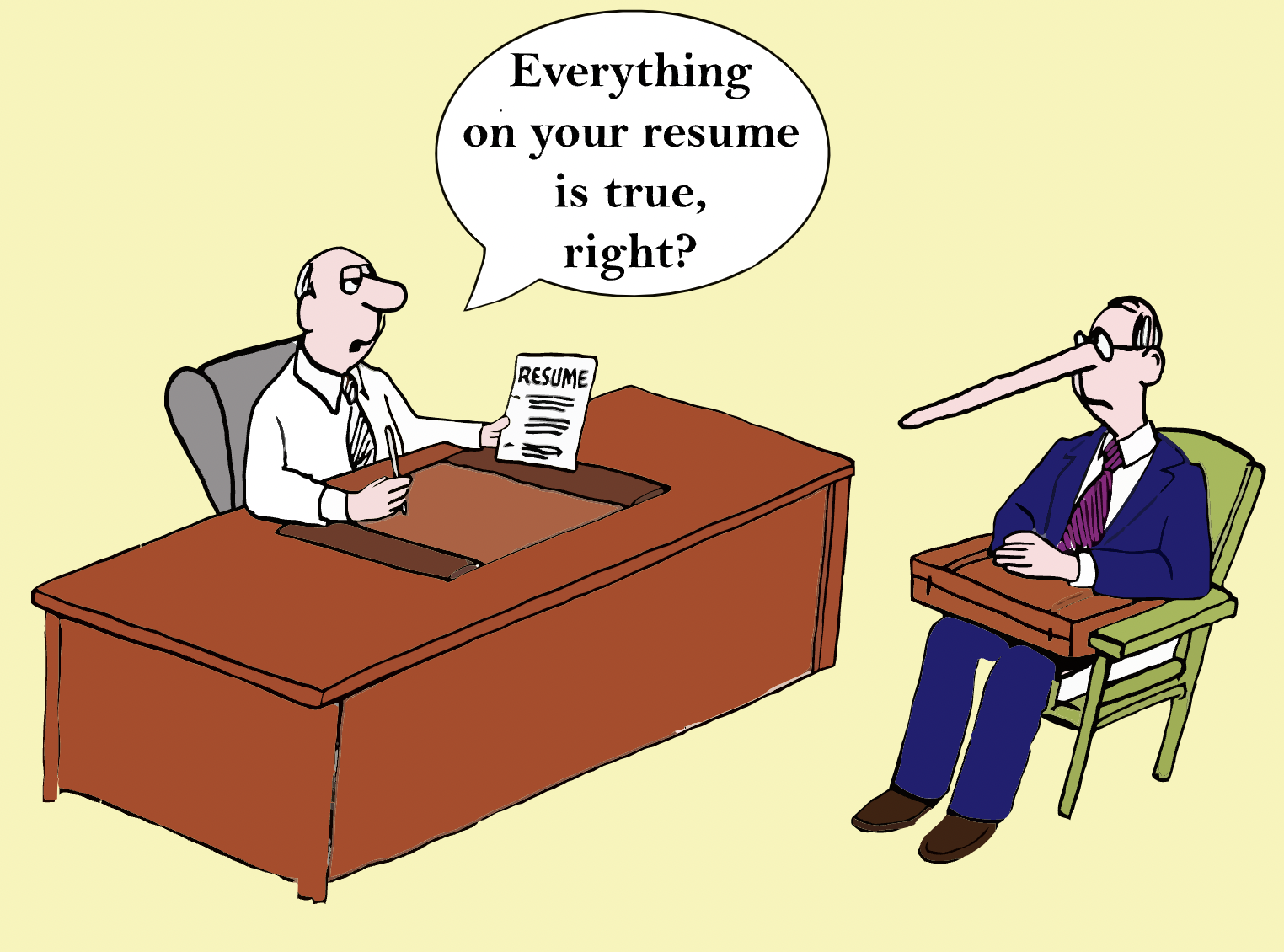 The ‘Pinocchio Syndrome’ (applicants lying and/or misrepresenting their backgrounds) has become a serious problem for employers seeking to hire talented people and has made the verification of identity, educational/credentials, employment history, reference checks and criminal records checks a true necessity.

According to the article, ‘Are you Hiring Charlatans’ by Checkster, “A startling number of applicants lie on their resumes, interviews, and during reference checks, yet organizations hire them anyway, says a new Checkster study of ethical standards in the hiring process. In a revelatory survey of 400 applicants and 400 hiring managers, HR professionals and recruiters, Checkster found alarming numbers of applicants misrepresent themselves (78%) and a great number of hiring managers (66%) are willing to accept these lapses in ethics.

The applicant survey revealed widespread willingness to misrepresent information during the hiring process, with 60% of applicants claiming mastery in skills they had basic knowledge of. Over 50% reported working at some jobs longer in order to omit an employer. Other inflated claims included: made-up relevant experiences (42.25%), false reason for leaving a job (45%), using a director title when the actual title was a manager title (41.25%), and a degree from a prestigious university instead of their own (39.25%).”

In the article, ‘Fake Doctor Tricks Staffing Firms into Giving Him Assignments,’ by Staffing Industry Analyst, “Vishal Patel, 30, of Glen Allen, Va., posed as a doctor using fraudulent information to land assignments through medical companies. One of those assignments was to work as an independent contractor physician for a free clinic in Newport News, VA., where he saw nearly two dozen patients before he was terminated.” It does not take much imagination to identify the harm that a fake unqualified doctor could do. In fact, it is very scary because people could lose their lives at the hands of a medical charlatan.

Allen Ezell, former FBI agent said it well, “All of us can be harmed by any professional that … does not have the full extent of training that his credentials purport that he has.”

Why Do Applicants Lie and Cheat?

While the reasons that job applicants lie are ultimately an individual matter research has shown there are a number of contributing factors.

Low unemployment is often a factor because in a very competitive job market applicants know the information that busy hiring managers want to see and are looking for ways to stand out from the crowd in the resume stack on the manager’s desk.

In addition, many job applicants assume that employers aren’t verifying every detail in the dozens and even hundreds of resumes that they’re sorting through.

Also, many candidates who have grappled with unemployment sometimes try to hide job gaps that they think might disqualify them.

A study published in the Academy of Management Journal found that envy can also be a motivator. The study suggested that job seekers were more likely to embellish a resume after comparing their job search to that of their peers.

Another reason is the easy access to bogus services that provide fake degrees, fake references, fake verification of employment, and many more such services.

A clear example is WorkplaceReferences.com, a web site that produces fake references. The following is a direct quote from their website:

“Employment Verification: We will act as your HR department or former supervisor and provide you with outstanding references on your behalf.

This is just an example of many fake job reference web sites that are out there.

In today’s hiring market it is more important than ever to have a background screening provider that has meticulous processes to weed out applicants who are using these fake reference services. Some of these processes include actions such as ‘not calling the reference numbers provided by the applicant, but directly sourcing the number to ensure it is a legitimate number,’ and verifying the identity of the reference provided to ensure its valid and not a best friend or cousin providing the reference.

The Council for Higher Education Accreditation, which regulates the legitimacy of degrees, estimates that 100,000 fake degrees and diplomas are sold every year. Fake diplomas are a billion-dollar industry.

Another example is PhonyDiploma.com, which openly sell fakes degrees and diplomas. Quote from their website:

“Buy fake college and university diplomas and transcripts right here with the best service and accuracy. Our Actual Match designs look just like original school design and we can create Custom designs that look like what you submit.”

What Can an Employer Do?

The simple answer is that these fabrications are easy to uncover when a comprehensive and thorough background screening is conducted. Some studies have reported that as high as “83 percent of employers said screenings revealed issues about a candidate that wouldn’t have been caught [without a background check] . . .”

In the race to find good talent in a very competitive market many employers are tempted to cut corners in the hiring process by reducing the types of background checks and ignoring that this practice may increase their risk of making a bad hire.

To uncover the rising number of resume misrepresentations and lies hiring managers must remain steadfast in conducting a core set of background checks. This should at minimum include all of the following:

Start with Identity Verification: This use to mean a social security check, however, we have learned that this only really verifies who is the person in possession of the social security number not necessarily who the person really is. In today’s high tech world the best practices involve use of biometric tools such as fingerprints, facial recognition, retina scans, etc.

Education, License and Credential Verifications: The ‘Background Screening: Trends and Uses in Today’s Global Economy’ research study by the Professional Background Screening Association (PBSA) reported that only 40% of employers actually verify degrees. In some fields such as health care, commercial drivers, airlines, etc. credential verification are a legal requirement. While the position you have open may not carry the risk of hiring a fake doctor as we alluded to earlier think about the harm that a Chief Financial Officer that does not truly have that MBA or Finance degree could inflict on your organization or a bogus Information Technology analyst that has access to virtually all of your company’s competitive and confidential information.

Verify Their Employment History: Check past and current employers to authenticate a candidate’s work experience, work titles and work dates.

Reference Checks: This could be the single most important part of a background check because when done well you can get a glimpse into how the candidate performed in previous jobs, gain a clearer understanding of their actual experience and you may even discover information about their personality and character.

Criminal Record Checks: While criminal Records are the most prevalent type of background check conducting by employers they should not be used indiscriminately. They should be tied to the nature of the work to be performed and the identified risk associated with the position.

There are many other specialty focus background checks that can be deployed based on the nature of the work and risk associated with the position. Some of these could include, motor vehicle records checks, credit checks, terrorist list checks, social media checks, newspaper and online media checks, etc.

It would be nice if in the real work the noses of job applicants and volunteers would grow when they told a lie just like Pinocchio’s did when he told a lie. Unfortunately, it takes a bit more effort on an employer’s part to validate that a new hire is who he/she says they are, possess the right work experience, education, credentials and competencies to perform the work needed and not pose unnecessary risk to the organization.